New brewpot-- courtesy the fine folk at OBK who seem hell-bent on completely obviating the need for any lesser homebrew supply store in Canada, I have a 19-gallon brew pot with fittings that cost just half of what my 8-gallon Morebeer pot did. Certainly the quality is not the same (the Morebeer pot could survive a nuclear war, though I don't know if I'd want to brew with it afterwards) but it's a great kettle for the price!

New mash tun manifold-- the copper manifold I fabricated a few weeks ago got its first run. The mash tun itself had a staggering 23lb of malt in it, and the effect of both a thicker mash bed and a better manifold meant that my brewhouse efficiency shot from the mid 60's to somewhere near 80%! We put some more volume through the mash bed, getting closer to 12.5 gallons (post-boil) instead of the target 10.5, and yet its gravity was still about 6 points higher than I predicted.

(What the heck do I mean about efficiency? Here's a good article on brewhouse efficiency but the TL;DR version is: there's only so much potential sugar in your ingredients, and how much of that makes it into your beer determines your efficiency. Homebrewers are usually in the 70's. Commercial brewers are in the high 90's.) 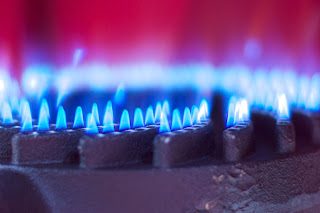 Andrew brought his pump and plate chiller, things that I will need to acquire for myself going forward, to make the process work. We still went for a simple infusion mash (and missed mash temperature substantially, requiring an adjustment) and a very simple brown ale recipe to minimize complexity.

Instead of starting at 9am and finishing around 3:30, we got rolling around 10:00 and wrapped up at 5:30. A long day! Getting water on the heat is even more important than before, and I definitely chewed through some propane so having a full tank on hand is also necessary.

During the brew day, we also polished off 3 previous beers. A lone bottle of Banquo's Best Pilsner had been in the fridge for about 4 months, crystal clear and quite clean tasting from the cold conditioning it received. A last bottle of 2012's Fresh Hop IPA still had a good bitterness and body, but had lost a lot of its hop nose and flavour. And we kicked the keg of Grumpy Urbanist, which means until this beer is mature I have nothing on tap.

We split the wort between us, each of us putting six gallons on to ferment, using different yeasts. Comparisons should be interesting.


This is probably the last brew day of 2013. Unless there's a well-timed warm spell, the brewery will be shut down until spring. I was hoping to get more beer on the go, but time has not permitted. I'll use the downtime to prepare the brewery for solo 10-gallon production.