This beer is inspired by Dogfish Head 90, only.. awesomer. I present: WolfShark FACE 90XL!!!!

Actually, it didn't quite go entirely as planned. Gravity undershot, so it won't be as awesome as DFH (were that even possible to begin with.) But still, the name must live on, because I can't wait to see what Erin does with the label design.

The recipe is below. And yes, you read that right: hop additions every ten minutes, to get something like a continuous hopping over a 90 minute boil. All the hops went into a single bowl and I measured out about .4oz every ten minutes. To match predicted IBU I entered all the additions laboriously into BeerSmith. (Would it kill him to add a cut/paste function?)

The real DFH90 is Amarillo, Simcoe and Warrior. This beer is Amarillo, Galena and Northern Brewer. The malt bill is pretty comparable though, especially the Thomas Fawcett Amber (yes, that stuff again.)

Some stuff in the recipe notes about other difficulties I had today, including stuck sparge. It's a good bet that this won't be the clearest beer I've ever brewed. 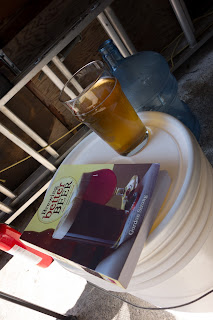 It's a brew day on Sunday! Coming up, a "Dirty Fawcett" amber.

On Friday, I stopped in at Gilbertson & Page, a malt distributor near Fergus. I had an interesting chat with a new member of the team there, Shelley, who is interested in setting up that homebrew supply presence that G&P has been saying they want to do for the last two years now.

Along with the full 55lb bag of Canadian 2-row I went there for, I ended up impulse-buying a 3/4 bag of Thomas Fawcett Amber. Turns out, this amber has no diastatic power, and has a fairly strong flavour, so it's not suitable as a base grain (contrary to what I thought.) But now I have rather a lot of TF Amber.

So, I plan on dirtying up a rather straightforward ale tomorrow with the stuff. As far as recipes go, this is a simple one. 9lb of Canadian 2-row pale malt, a full 2lb of the Amber, and the last of my Willamette pellet hops.

If nothing else, we'll find out what this Fawcett tastes like.