"I do not like this word 'bomb'. It is not a bomb. It is a device which is exploding." 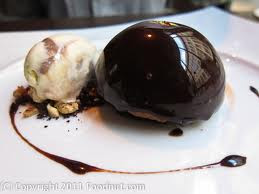 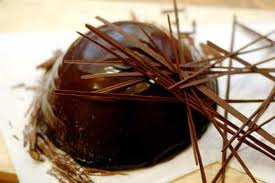 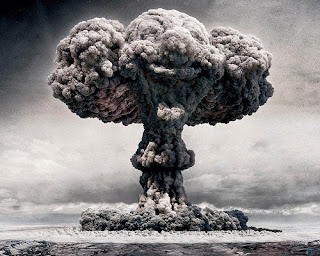 All bombs, or bombes. Some are more chocolate than others. 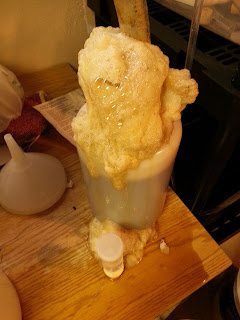 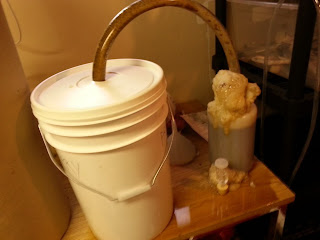 The rig above is a blow-off hose into a large plastic jar with water that serves as the airlock. While I've seen foam pushed through before, this blow-off rig has never been defeated. Until now.

And really, that's just the fermentation. I had a wonderful picture of the surprise boilover that occurred during brewing, but managed to lose it.

I'm glad I didn't name this beer beforehand! This was to be a self-indulgent brew day. An imperial stout is self-indulgent enough, but this one will see the addition of some booze-soaked cacao nibs and vanilla bean to make it a chocolatey. It already has the barley flakes to make it smooth and rich, and that's why it's so prone to explodiness-- it's almost viscous. And I think I've lost about 4 or 5 bottles' worth already to boilover and fermentation foaming.

Assuming it doesn't foam itself entirely out of the fermenter, this beer will get its cacao and vanilla additions in a few weeks, see some further aging, and be bottled in November. It will then get some nice shelf time, probably requiring until at least January before it's ready to be cracked open and enjoyed as a mid-winter treat.

Self-indulgent indeed, and self-named, too."Bombe" it is. Chocolatey and explodey.

The recipe below doesn't include the cacao or vanilla additions. Also, because of the boilover I mentioned, the hopping is... unknown. I don't know how much hops were lost when the pot turned into a mad, frothy god and whether replacement additions were less, more or about the same.