I was up early this morning, which meant I had time to put an order in to OBK before going to work (where the site is annoyingly filtered). A relatively modest order, but an important step in moving to a 10-gallon brewing process. The main item of the order is a 19-gallon 2-port brew pot that will cost about half of what the 8-gallon pot I ordered from Morebeer did. (The quality may not *quite* be the same but functionally, it should be equivalent. And I don't get shanked on shipping costs.)

It is, of course, not the only part of upgrading batch size. Andrew﻿ is loaning me some equipment needed to prototype the process-- namely, his pump and counterflow chiller (and swank silicon hose). Moving and cooling a greater mass of scalding hot liquid becomes a real challenge and these tools become a lot less optional above 5 gallons. Hopefully A will also be present for the inaugural brewday next Saturday (as well as the weather staying comfortably above freezing...)

This is only the first step, though. Based on the experience of next Saturday, I'll also be looking at chiller, pump and hose setup so that A and I don't have to do a brewmance divorce. The process will still be fairly low-tech but then I can start to investigate mashing improvements like recirculation (HERMS or RIMS), as well as paying some attention to the fermentation side.

I've also done some work on the mash/lauter tun, after some hands-on experience with Grub of Biergotter. A better lautering manifold, built of copper, to replace the finicky dishwasher hose filter, I hope will buy me a mittful of mash efficiency points as well as removing a serious headache from my brewing process (a flexible filter hose that is pinched or that folds upwards in the mash bed can cause unwelcome variability.) 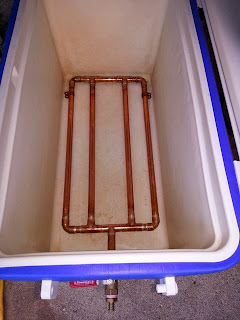 At the moment, though, my main goal is to just get the batch size up. I want to be able to keep the keg fridge pouring for less time than it currently takes me, so that I have more time for interesting experimental brews (and other things in life.)

Speaking of experimenting, a recent trip to Belgium has me hooked and interested in replicating Belgian beer styles. That will be quite the challenge. My only foray in that direction resulted in the regrettable "Banabel" tripel, and I hadn't had the courage to try since.

Saw a lot of breweries while I was over there, too. Might put together a future post on that.